Steam was based on the studio work  Fall 2 (shown on right) an earlier work made of original vegetable steamers.

Fall 2 was shown as part of my series Fallen in the inaugural exhibition Second Lives: Remixing the Ordinary at the Museum of Art and Design(MAD) NYC, 2018.  It was also exhibited in 2007 at the Powerhouse Museum Sydney in Smart works: Design and the Handmade. 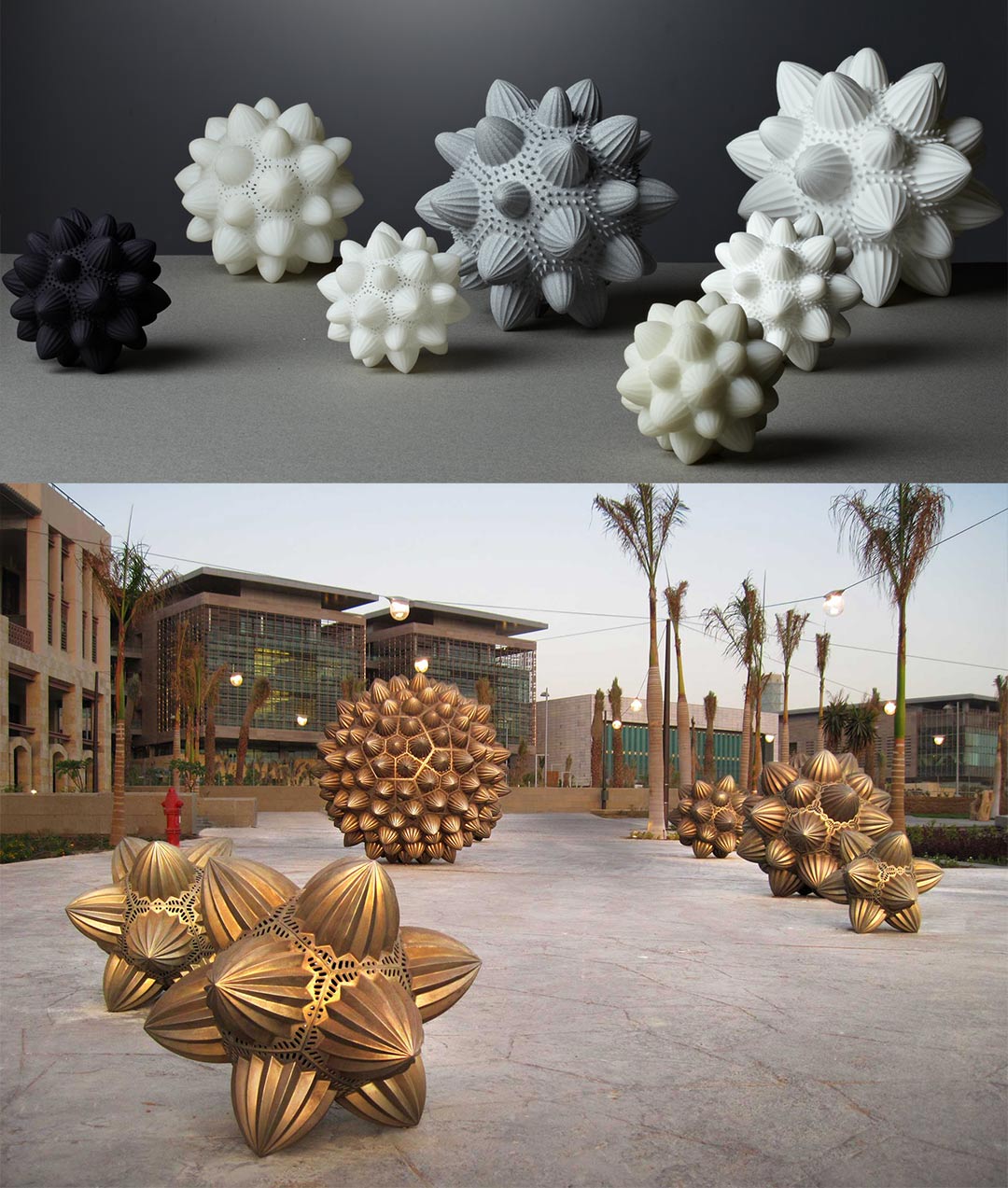 This was the first commission that I undertook with Urban Art Projects (UAP). UAP Shanghai and UAP New York are partners for this project (please see LOS). UAP wrote of Delphinus:

“Marcus’ sculptural practice of utilising distinctly mundane everyday domestic objects creates an aura of intimacy that stems from nostalgic memory and familiarity with in this case, the humble lemon squeezer. Marcus’ internally lit sculptures are positioned to match the Delphinus constellation documented by astronomer As-Sufi (Azophi) over 1000 years ago, and guide pedestrians through the Seacourt area.”

The small bronze component of Delphinus was later used as basis for Ascorbic (please see UAP URL). Working with an industrial ceramicist I used this existing mould to slip cast a large ceramic work. This led to a series of further ceramic works that I am continuing to develop.

The process leading up to fabrication and installation of Delphinus began in 2007 while I was in the USA.   Renders were made from my sketches and these were then turned into 3D prototypes.   These processes immediately promised new and exciting opportunities for studio works and I began producing these as small miniature works in their own right.

When I was invited to show at the Sea Foundation Netherlands, files were downloaded to a 3D printing company in the Netherlands and sent directly to the exhibition. Further small prototypes/miniatures have been exhibited in various locations including Shared Visions (Poland). 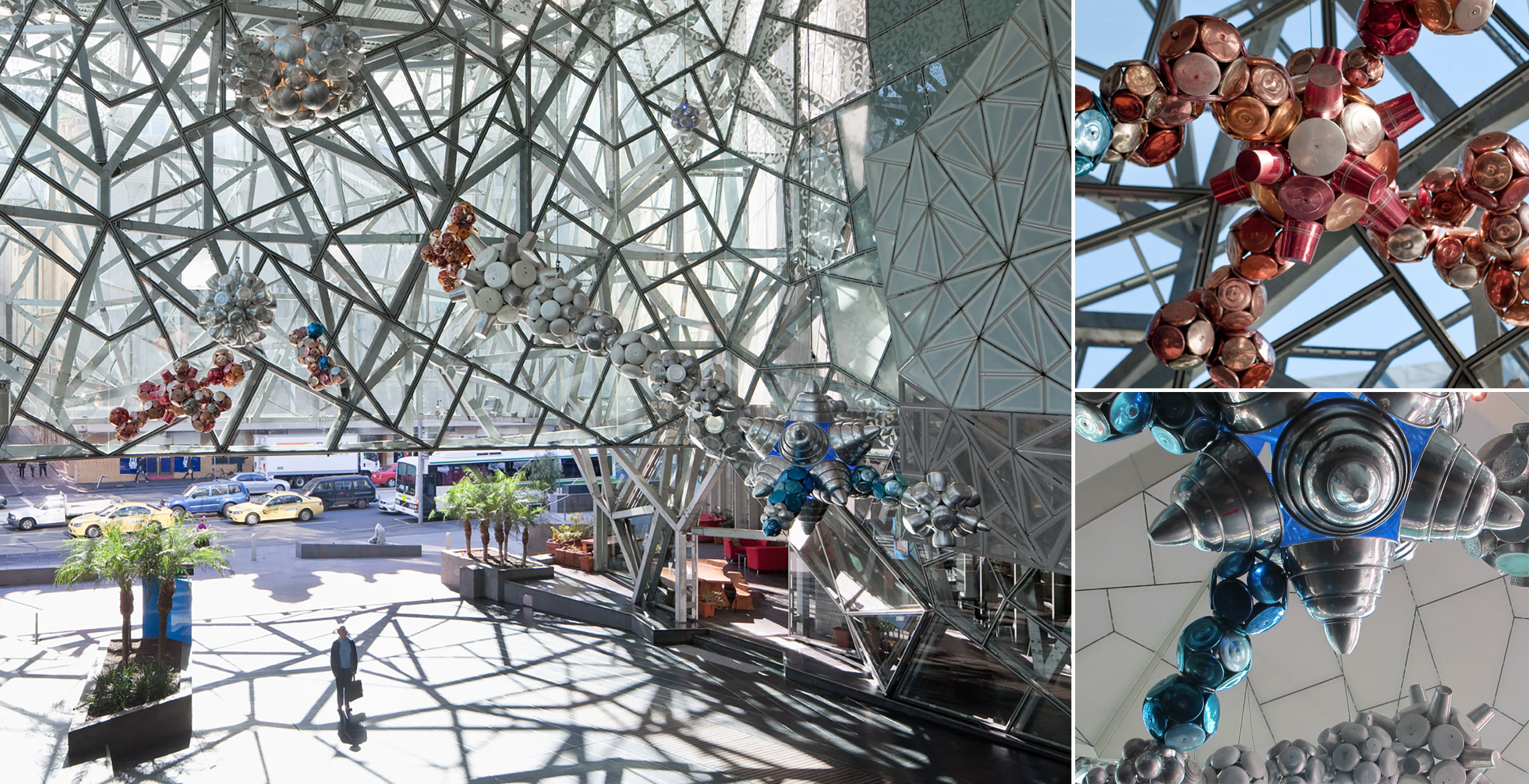 Commissioned as part of Fed Square’s Occupy program, an ongoing series of site-specific installations, the work continues the artists’ practice of collecting various types of aluminium cookware, and reshaping it into domes, spheres, clusters, and other serial forms reminiscent of 60’s utopian architecture. Internally-lit, and ambitious in scale, Marcus’ suspended sculptures playfully appear as if a small storm of space debris has re-entered the atmosphere 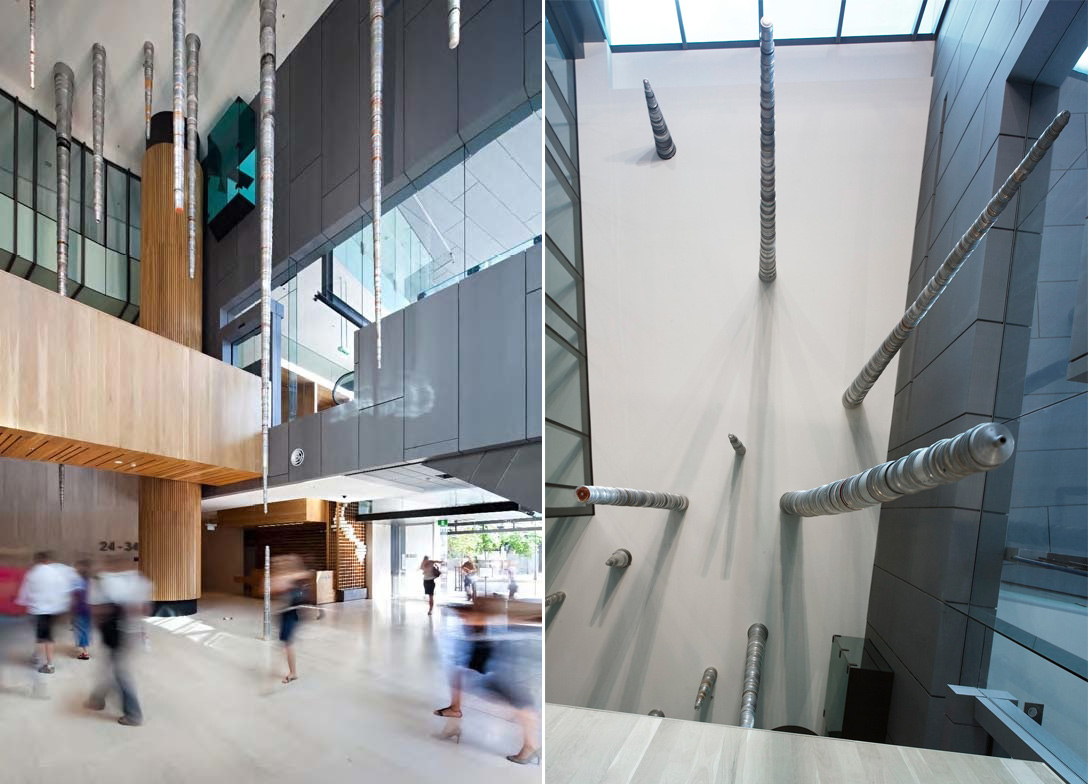 Trickle is an installation of 14 ‘stalactites’ and ‘stalagmites’ made by layering more than 3,000 found aluminium saucepans, saucepan lids, biscuit tins and pudding bowls. 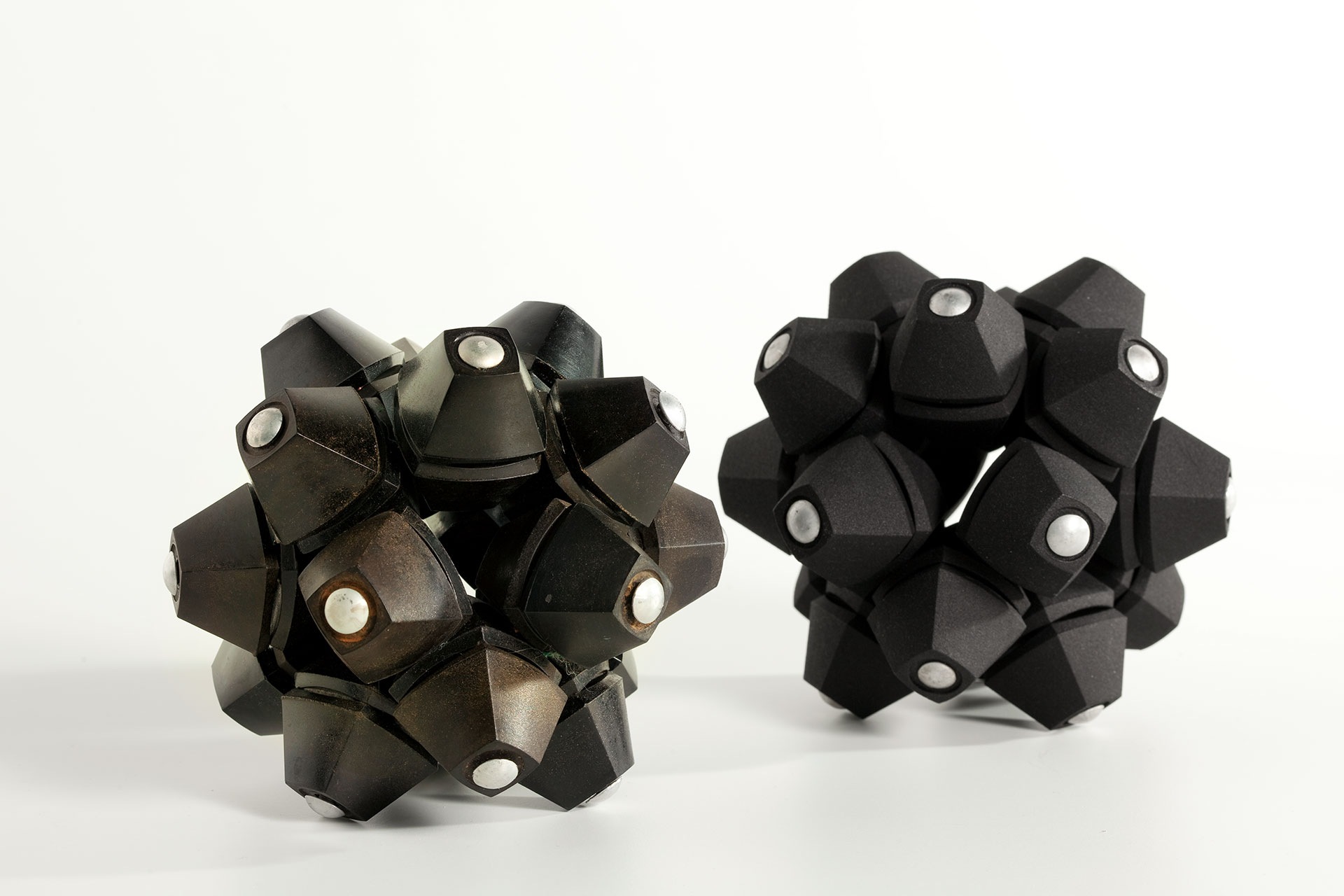 Nixon and Khrushchev expounded political ideologies at the now famous 1959 Moscow ‘kitchen debate’ at an exhibition using a ‘typical’ American kitchen as a bravura demonstration of technological and social superiority.  Since that time, centres and peripheries of material production and technologies have changed dramatically.

One component of Khrushchev + Nixon is assembled using knobs of saucepan lids collected over 20 years, the patina of use etched into the point of connection between hand and lid. While the other component is fresh from the printer, delivered to the doorstep in a smart new box.  The identity of who represented by each piece is now longer clear. 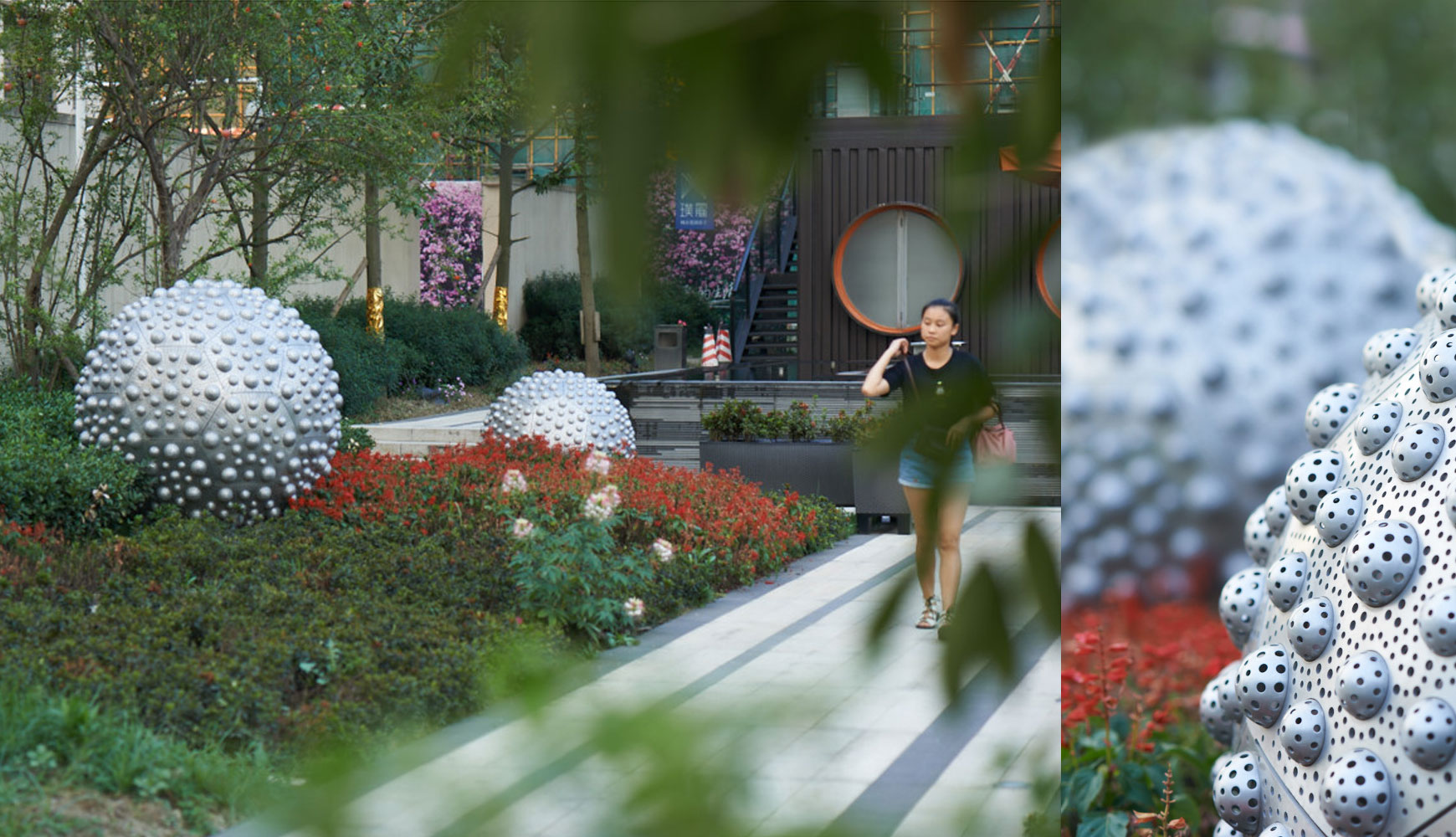 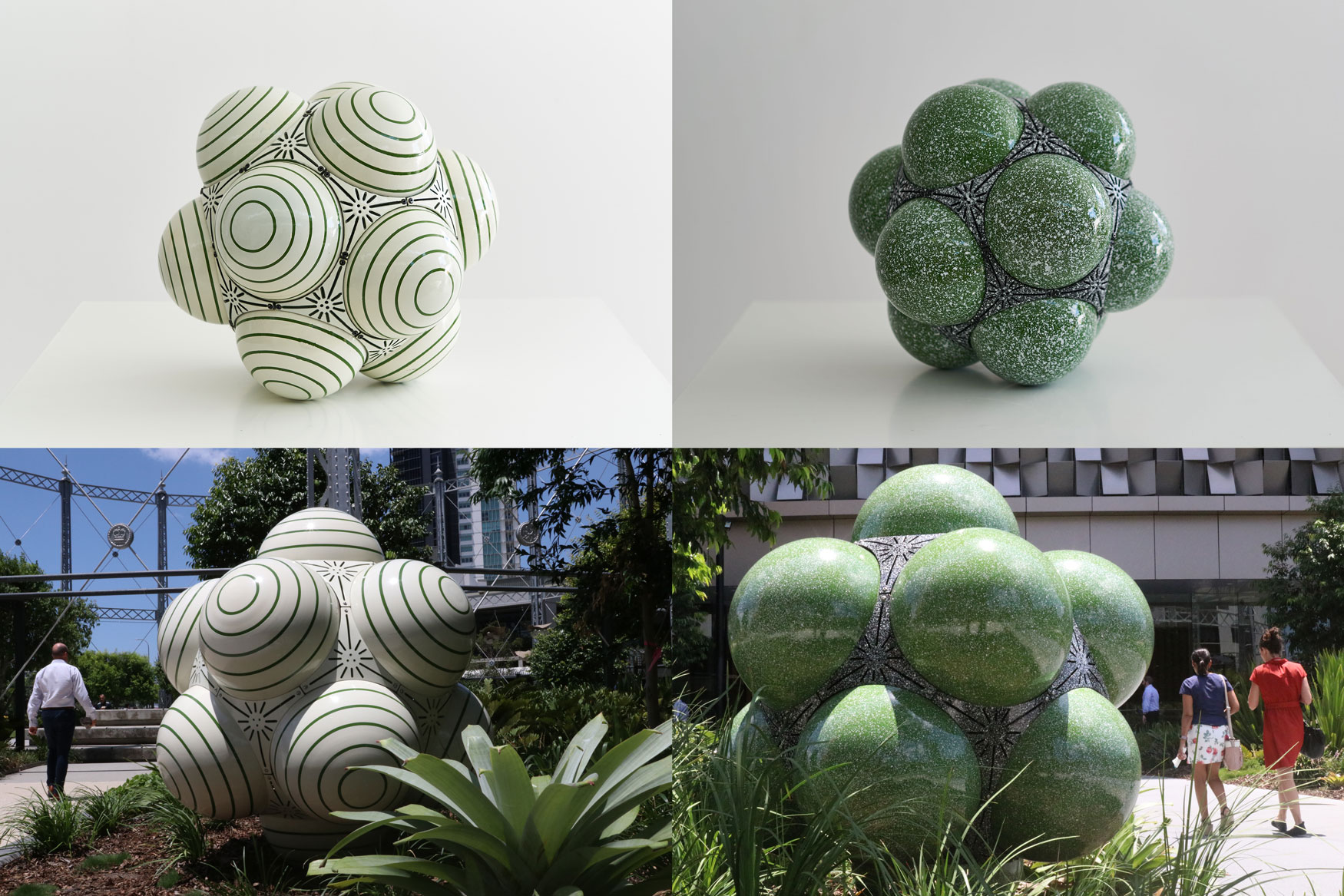 Plant installed in late 2018 is my most recent public artwork.  I was able to work directly on these pieces to produce the desired vitreous enamel surfaces and to produce the smaller studio works. I am developing a further series of works using this process and industry network. 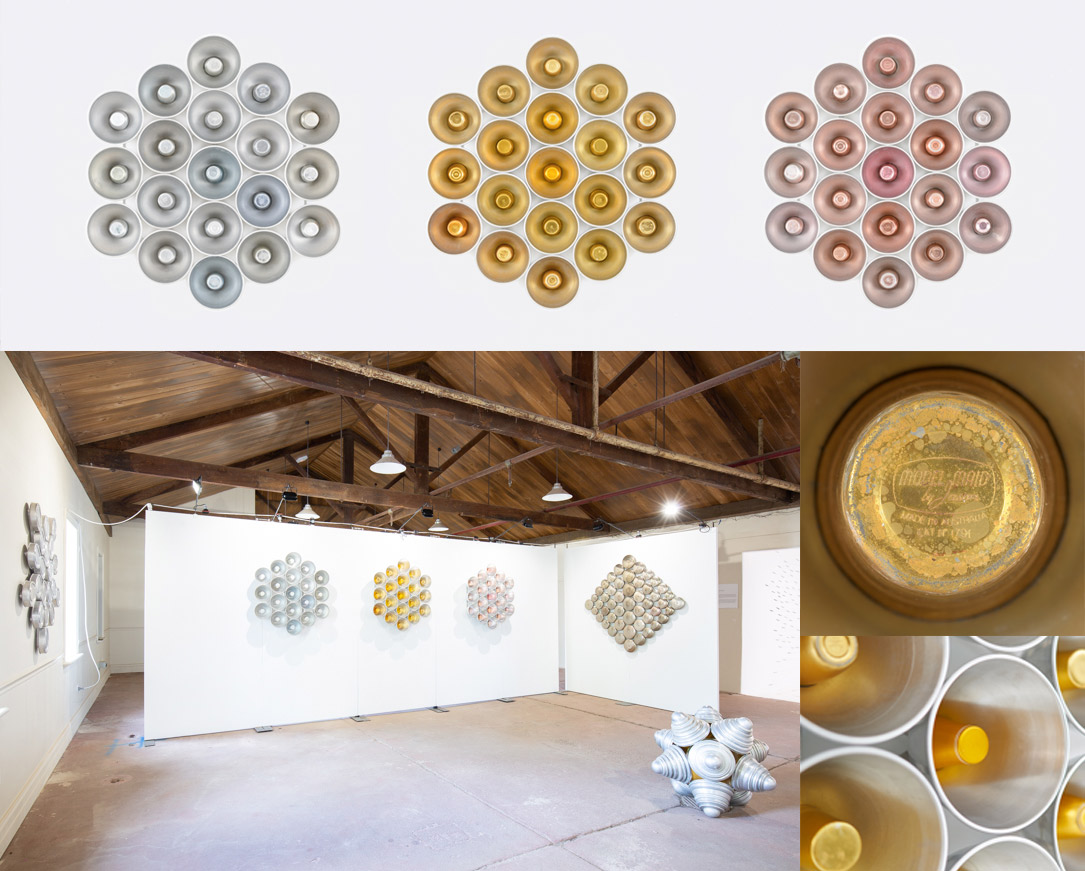 This work was developed from a much earlier series of colour studies including After Albers.  I plan make a large interior public artwork in the future developing this idea. 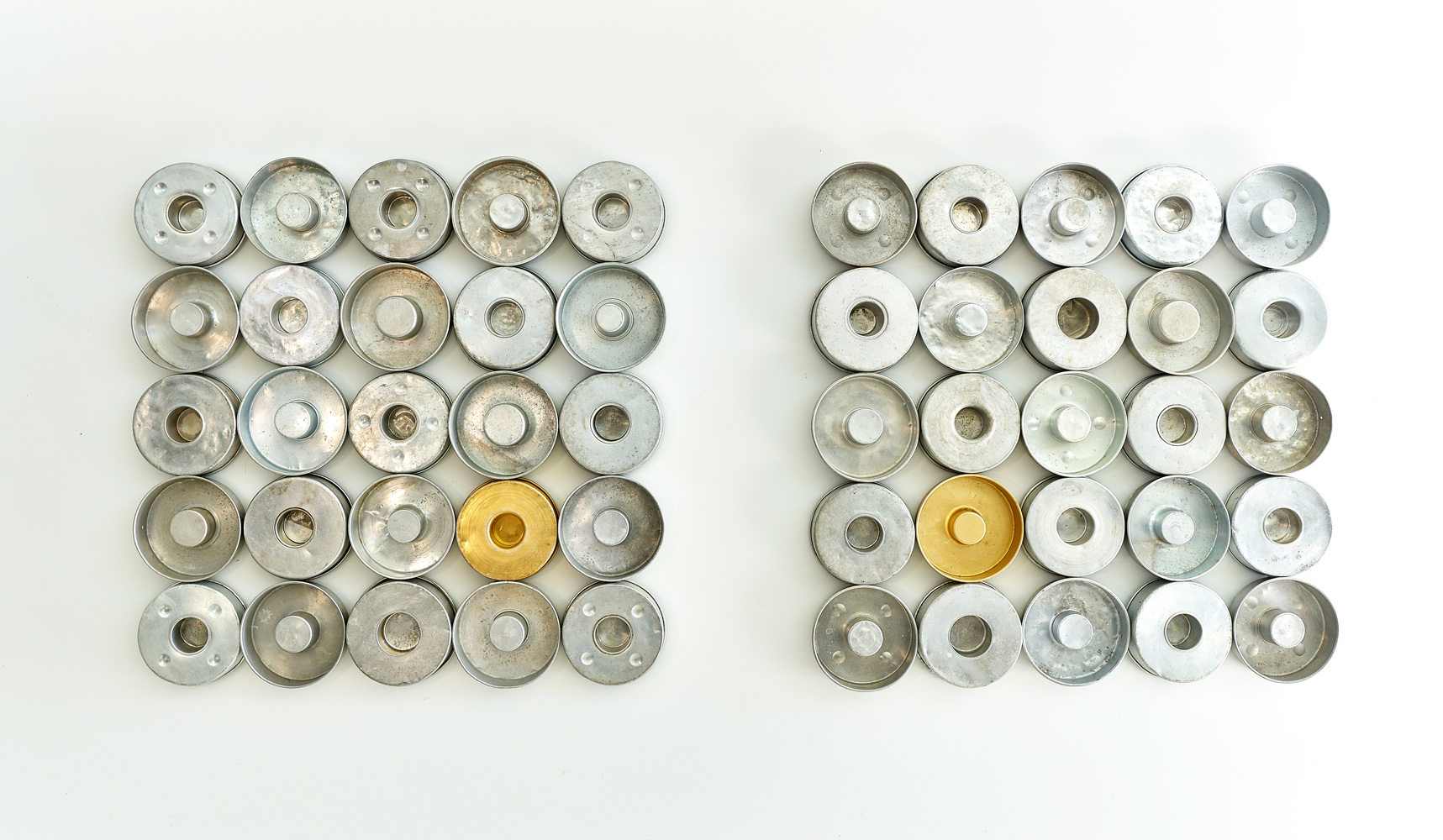 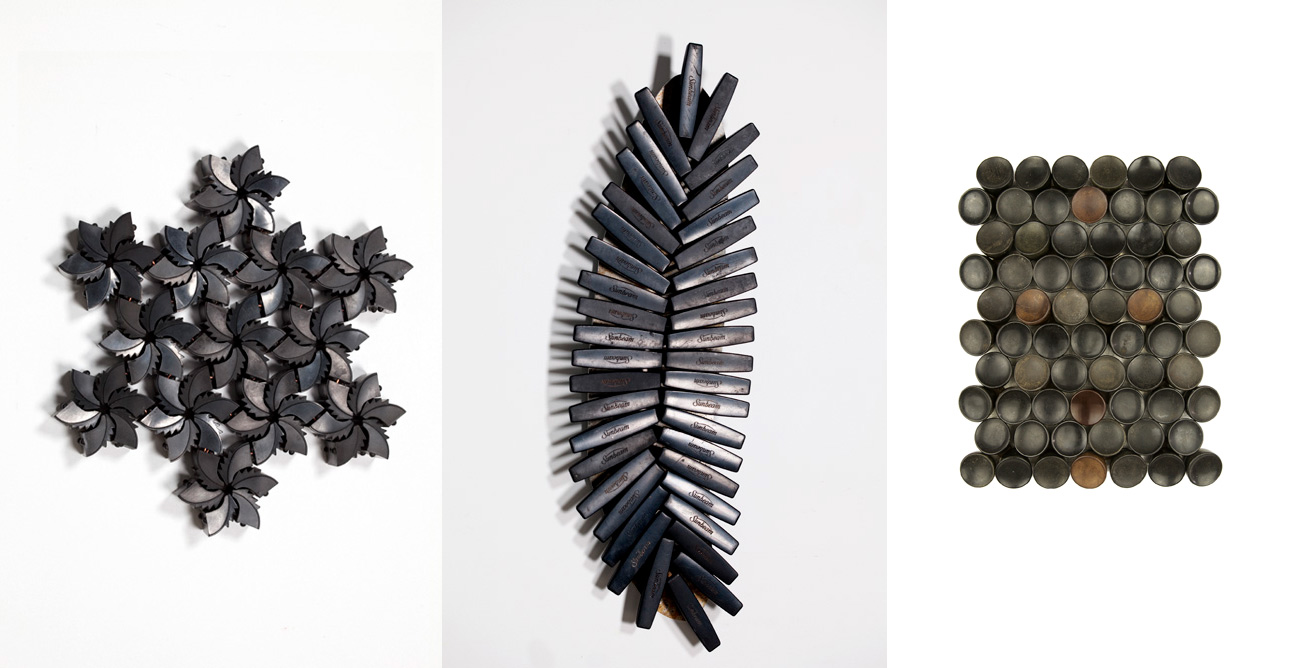 Carboniferous, Grip and Scale are part of an ongoing series of small works that are made from a huge trove of unused knobs and handles retrieved from the thousands of saucepan lids. The bulk of this material came from my large scale public artwork Trickle.  Critical mass has reunited lost archetypes, weird relations and rare beauties, often overlain with the optimistic prudence of improvised repairs and patina of generational use.  The works draw upon the somber quality of Victorian black jet mourning jewelry and continue my interest in the extremes of scale and the relationship between the miniature and the gigantic.